Guatemala’s National Strike Demands and End to Corruption and Impunity

Guatemala’s National Strike Demands and End to Corruption and Impunity: The week before Guatemala’s General Elections sees Hundreds of Thousands of Guatemalans in the Streets

Thousands of Guatemalans gather in the Central Plaza during the National Strike on Thursday, August 27.

It was a cross between indignation and a party.

Yesterday, tens of thousands of Guatemalans filled Central Park in Guatemala City and throughout the countryside to demand the resignation of President Otto Perez Molina. From McDonald’s and the local corner store, to the red city buses and government offices, doors were closed and people came in droves from throughout the city and beyond to support the National Strike. Guatemalan flags were on high demand and the crowd sang the national anthem together, waving them furiously in front of the Presidential Palace.

The National Strike was called by the rector and students of Guatemala’s autonomous university USAC, the campesino movement, union leaders, businesses and Guatemalan citizens alike. Although a number of demonstrations have been held since the La Linea corruption scandal was uncovered, the call for a Nation Strike resulted in hundreds of thousands of Guatemalans in the streets and along highways in the interior of the country.

In April, La Linea was uncovered and denounced by the UN-mandated International Commission Against Impunity in Guatemala (CICIG) and the Public Prosecutor’s office. The extensive network included  high level functionaries, immigration and revenue agents and military officials who robbed million of dollars in a customs graft scheme. The investigation had been ongoing for years and resulted in hundreds of accumulated hours of wiretaps incriminating people at all levels of the Guatemalan government. As a result, arrest warrants were issued.

The first arrest warrant was for Juan Carlos Monzón, Private Secretary to Roxana Baldetti, then Vice-President of Guatemala. The pair was traveling in South Korea at the time the arrest warrant was issued. Monzón has yet to return to Guatemala, despite an Interpol search. This set off the #RenuniaYa (#ResignNow) campaign that mobilized ten of thousands of Guatmalans. They took to the streets to demand the resignation of the president, Otto Perez Molina and Baldetti. As the Public Prosecutor’s office began implicating more officials, senior and junior cabinet ministers and parliamentary secretaries alike began resigning. Some have also fled the country; many speculate they are fleeing while they still can. Just yesterday, former Minister of the Interior Mauricio Lopez Bonilla who was once considered a staunch Presidential ally, was seen on a flight to Punta Cana, Dominican Republic.

Roxana Baldetti was forced to resign as Vice President in May amidst growing indignation of the people, even though at the time most only speculated about her involvement.

This all changed last Friday. The former vice president was arrested on charges of illicit association, passive bribery and special cases of customs fraud and then indicted due to her involvement in La Linea. On Monday, evidence was presented to the Supreme Court of Justice for her indictment, which was granted.  The same wiretaps which made evident her control over the structure of the ring revealed another voice. President Otto Perez Molina was heard in the wiretaps, giving orders to Carlos Muñoz (former chief of the Guatemalan Revenue Agency who was also indicted), demanding he change the personnel in the customs office so things move forward. Once the evidence was made public, #NoTengoPresidente (#IDon’tHaveAPresident) was born and the call for a National Strike, demanding the President’s resignation, was made.

On Sunday night, Otto Perez Molina addressed the country in a televised message where he blamed interventionist actions for trying to undermine a democratically elected government. On the defensive since his war-time alias of Tito Arias was revealed along with his participation in Guatemala’s genocide in the Ixil region, former military general Perez Molina pointed fingers at CICIG and the international community for the chaos happening in Guatemala. He vowed to stay in power until the end of his term in January 2016.

The Constitutional Court has denied Perez Molina’s request for political immunity in the corruption scandal and it is now up to Congress to enact this order. This process will undoubtedly be slow, however, as the Lider and Perez’s own Patriot Party alliance has long dominated decision making in that space. 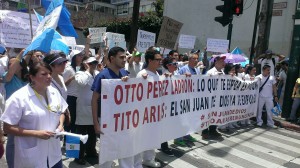 Nurses and doctors march in the National Strike: Ottow Perez Thief: Jail is waiting for you; Tito Arias: You’re Not Welcome in Our Hospital

Given the situation of chaos and uncertainty that Guatemala has faced since April, many question the decision of the Supreme Electoral Court to go ahead with elections on September 6. In just over a week, elections in Guatemala will take place for the new President, Members of Congress, Mayors and Councillors despite a national cry to forego the process, citing the fact that conditions don’t exist for a fair vote.

The three day national strike ended yesterday in Guatemala City’s Central Plaza, and in homes and streets and parks across the country. So many Guatemalans have been raised in fear of violence and repression by the State; the possibility of a common uprising has been dismissed time and again given the bloody history the country has lived. But the People have spoken and truth in Guatemala is now shouted on the streets against the government: “You’ve stolen everything! Even my fear!”

Campesinos, doctors, students, unionists, store owners, housewives, children and everyone in between came out to say they no longer are afraid, and Otto Perez Molina is no longer their president. In a week’s time, we’ll see who that will be, with or without the People’s support.