On Friday, February 26, a high risk court in Guatemala City sentenced Esteelmer Reyes Girón and Heriberto Valdez Asij, also known as “El Canche Asij”, for crimes committed in and around the Sepur Zarco military base in eastern Guatemala during the early 1980s. The former military officers were each convicted to 30 years in prison for crimes against humanity; Reyes Girón for his role in the sexual violence, sexual slavery and domestic slavery to which the 11 complainants in this case were subjected; and Valdez Asij for sexual violence against two of the victims. This trial marks the first time in the world that crimes of sexual violence perpetrated during an armed conflict have been tried in a domestic court.

Flowers are part of the ceremony held outside the courthouse where the Sepur Zarco trial came to its conclusions.

In addition to the 30 years sentences, Reyes was also convicted of the murder of Dominga Coc and her two daughters which occurred while he was in command of the Sepur Zarco military base. He was sentenced to another 90 years in prison – 30 for each murder. Valdez was also convicted of the forced disappearance of 7 men from communities neighbouring the Sepur Zarco base and sentenced to an additional 210 years in prison – 30 for each forced disappearance. Following the conviction, a reparations hearing was held today in which the men were ordered to pay the women between Q500,000 and Q750,000 each for damages related to the abuse they suffered as well as the abduction of their husbands.

The court heard expert witness testimonies throughout the trial and reports were used to build the prosecution’s case. In addition, the recorded testimony of 15 Maya Q’eqchi indigenous women who gave first-hand accounts of being forced into sexual and domestic slavery after the forced disappearance of their husbands in pre-trial hearings in 2012 were presented to the court during the trial. The women told of the violence and cruelty they suffered at the hands of the army at the Sepur Zarco military base, and how they feared for their lives.
As the women’s testimonies were key to the case, they were also a focal point of the defence’s attack. However when delivering the sentence, Presiding Judge Jasmine Barrios reaffirmed that the three-judge panel believed the women’s testimonies and the horrific acts committed against them. Barrios noted that the women’s husbands were forcibly disappeared while in the process of soliciting land titles and that once their husbands were gone, the women were seen as “available” and were told, “The soldiers are your husbands now.”

“Justice” and clapping were heard in the courtroom after the guilty verdict was handed down.

Importantly, the sentence recognizes the use of sexual violence as a tactic of war. Judge Barrios noted, “As they have hurt these women, they have also hurt our society…These acts have broken the fabric of [Guatemalan] society.” In the sentence, the judges expressed the hope that these crimes are never repeated.

In a press conference outside the court, Ada Valenzuela, director of the National Union of Guatemalan Women (UNAMG), co-plaintiffs in the case, shared some of the reflections of the women’s organizations involved in the case, as well as the plaintiffs, “The women broke their silence so that no women in the world, and in Guatemala, will ever have to suffer as they did.” She went on to say that the prosecution has shown the women were not responsible for what happened to them and there are now people condemned for these crimes. 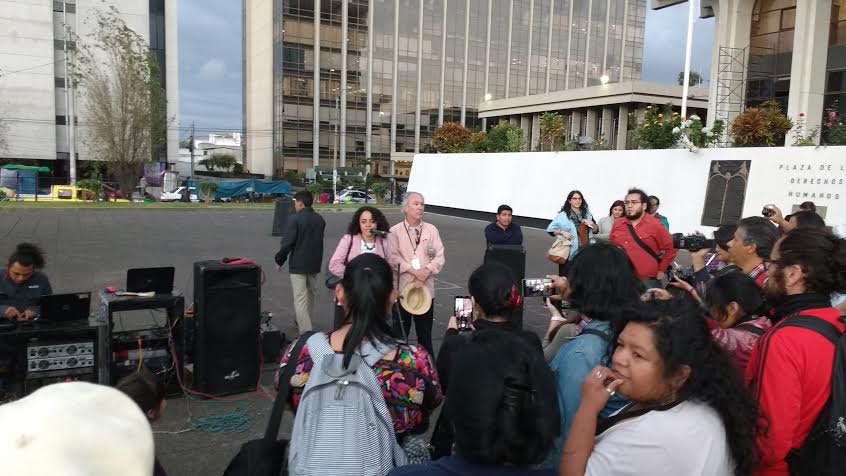 Ada Valenzuela, of UNAMG, speaks outside the courthouse following the guilty verdict.

Thirty years after the horrific acts of violence were committed at the Sepur Zarco military base, this historic verdict finally helps give some closure to the women, men and families that were impacted and makes inroads towards justice and an end to impunity in Guatemala. It also validates the thousands of women who have suffered sexual violence, not only during the Internal Armed Conflict, but throughout the country’s colonial history and marks an important moment in working to end the legacy of racism and sexual violence in Guatemala.

“The Revolution is Flowering” outside the courthouse following the guilty verdict.