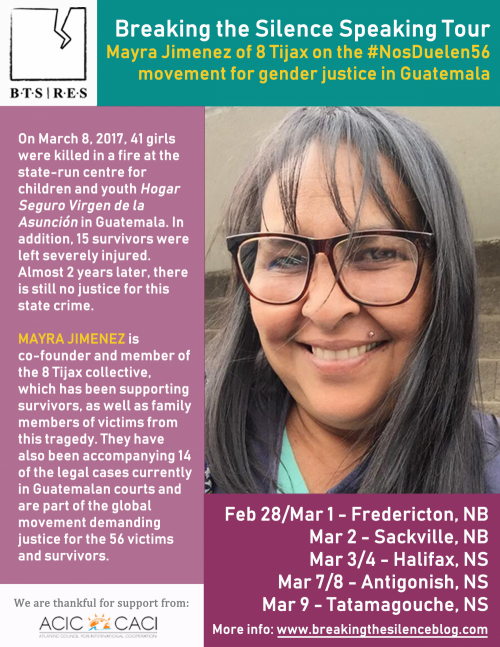 From Guatemala to Canada and beyond, it’s time to end state impunity for gendered violence!

To commemorate the 2nd anniversary of the Hogar Seguro tragedy, we invite you to join our Maritimes speaking tour with Mayra Jimenez Flores of 8 Tijax.

Mayra is a co-founder and member of the 8 Tijax collective, which was born on March 8, 2017. That day, 41 girls (aged 13-17) were killed and another 15 were severely injured in a fire at the state-run centre for children and youth Hogar Seguro Virgen de la Asuncion. Guatemalan police, the director of the Hogar Seguro, high-level government officials, and President Morales are implicated in these crimes (more info here).

The work of the 8 Tijax collective began in the hospitals where survivors of the fire were being admitted. Members helped to share the names of the girls who had survived and those who had died with families waiting for news on the outside. They also transported families to the hospitals and the morgue, and provided psychological assistance, as well as moral and spiritual support. After the last victim was identified, they turned their focus to accompanying 14 of the legal cases currently in Guatemalan courts.

Nos duelen 56 (which translates to “We mourn the 56)” is a message by the global movement demanding justice for the 56 victims and survivors of the 2017 Hogar Seguro fire. Almost 2 years later, there is still no justice for these state crimes.

PHOTO: Mayra Jimenez (left) with members of the 8 Tijax collective and Marianita Palencia (the sister of one of the victims)

More about her: Mayra is a journalist by profession with a strong history of organizing. This includes serving as General Secretary of the Rafael Landivar University Union. In addition to writing popular education materials for refugee camps in southern Mexico, she has also worked directly with refugees, with a focus on women. In Mexico, she joined other Guatemalan women in women’s groups such as Nuestra Vox (in English Our Voice).

Mayra will speak throughout the Maritimes about 8 Tijax’s important work and provide updates from survivors, as well as the ongoing struggle for justice in this case. Throughout the tour, Mayra will be joined by local speakers highlighting issues of state impunity for gendered violence in the Canadian context.

Check back for more updates / events!

We thank the Atlantic Council for International Cooperation for their support towards these events.