Official Book Launch of In the Arms of Inup

On May 28th, 2022, Eve Mills Allen and Jeremias Tecu attended the Breaking the Silence Annual Gathering for the first in-person book launch of In the Arms of Inup. Released in 2021 by BTS member Jeremias Tecu, originally from Rabinal, Guatemala and now of Fredericton, New Brunswick, In the Arms of Inup is a moving story told by Jeremias and written by the author and therapist Eve Mills Allen. The book discusses many themes such as the violence that occurred in Guatemala during the Internal Armed Conflict, the challenges that refugees face, and the mental health systems and supports available for newcomers to Canada. 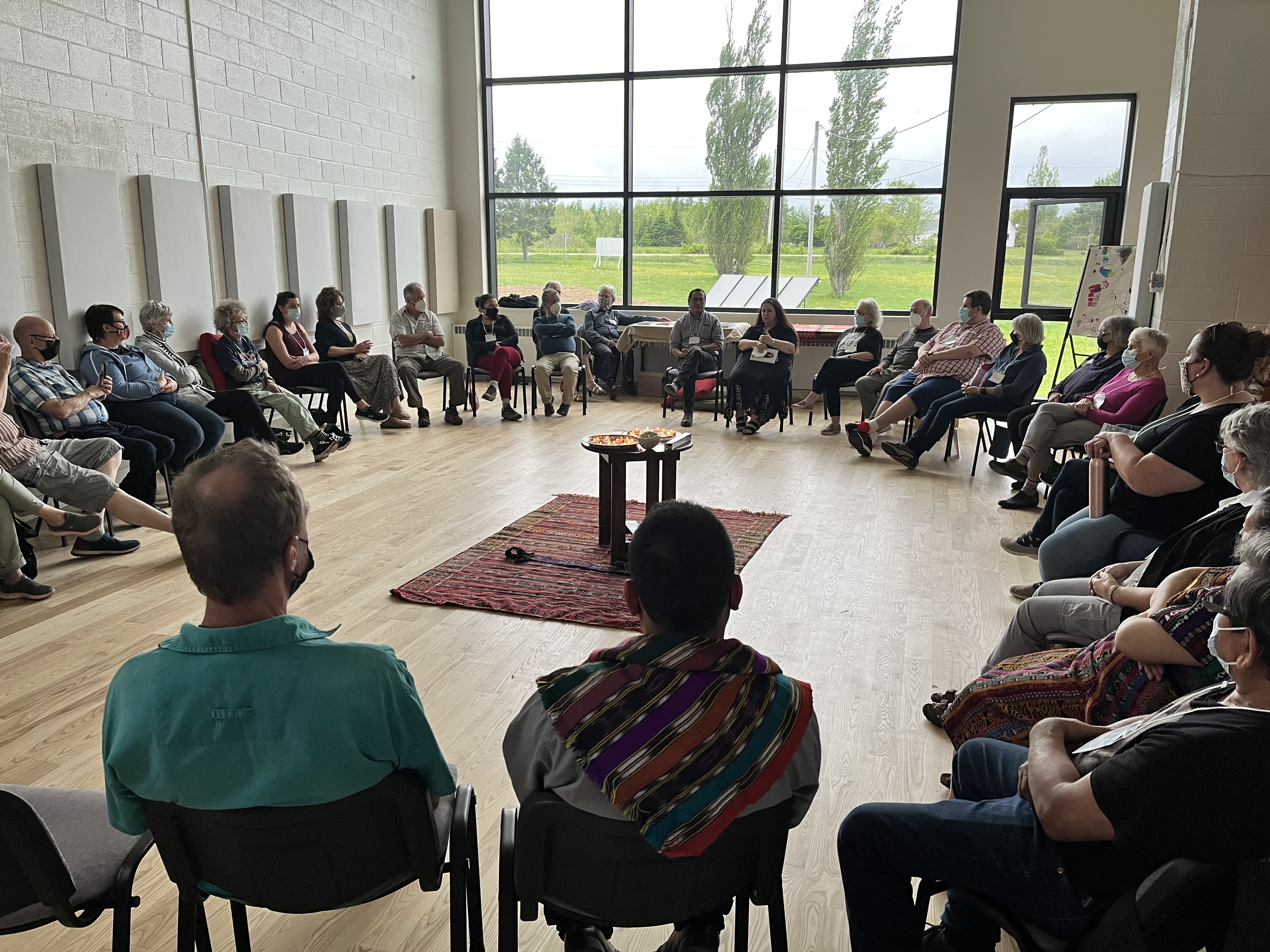 The group gathered during the BTS Annual Gathering at the Tatamagouche Center for the first official book launch of In the Arms of Inup.

During the launch, Jeremias and Eve told the story about how the book came to be, shared some of Jeremias’s testimony from the book, and explained the impacts and change they are looking to inspire with the book itself.

Jeremias explained how he asked Eve to help him write his story: “I sort of didn’t want to say it, but I was crying inside. So I asked Eve, would you write the story of someone who really needed it? And that’s when our spirits connected. It wasn’t easy.”

To capture this impactful story and to make it a healing process for Jeremias, Eve would meet with him outside of the traditional therapist-client office setting. They would meet to discuss Jeremias’s story over coffee, in parks, or for breakfast in Eve’s home.

First and foremost Eve explained she had to negate both her journalistic training and part of her therapist training for this project. All too often we think of the stereotype of a therapist who sits in their office, checking their watch during an appointment and a journalist pressed for time to efficiently get the facts of a story. Instead, Eve sought to build a relationship through accompaniment, requiring time, patience, and trust. Accompaniment is not only for human rights organizations like BTS but is a concept that can and should be applied in other sectors, including mental health and therapy.

Putting that into action, Eve allowed Jeremias to proceed at his own pace. Yet, he was also determined to follow the process, saying at one point, “[my story] has to be told, it has to come out from inside of me, When it comes out, it might not hurt so much.

Since its release, In the Arms of Inup has been used as reading material at the University of New Brunswick, St. Thomas University, and for teachers throughout middle schools in Fredericton. However, both Jeremias and Eve have hopes that the book and their example can cause bigger shifts in how mental health services are delivered in New Brunswick and Canada.

One big change they are looking at is getting therapists out of the office to where the community and the individuals in need of counseling are — meaning onto the soccer field, playing musical instruments, doing art, or looking at more holistic-community centered means of engaging in therapy and accompaniment of individuals. A second goal is to develop a healing center, or Inup Collective, which would be able to encourage, enable, or help existing organizations to offer mental health services in non-traditional ways.

These changes would especially be centered on helping newcomers who may be struggling to deal with their mental health and any trauma they may be bearing.

Jeremias concluded the launch by explaining that the importance of In the Arms of Inup is that this book represents not only his story, but also the story of what happened to other Guatemalan refugees, refugees from the Congo, and refugees fleeing war today. These narratives and issues are collective, community problems that need to be addressed as such. If they are, we will all experience those positive ripple effects of helping one another.

Before the launch, the participants at the gathering held a memorial and ceremony, led by Esteban and visitors to the network from Ontario. | Kathryn Anderson introducing Jeremias Tecu and Eve Mills Allen to the group at the Annual Gathering. (Photo credits: Laura Robinson)